The national Skill and Gallantry Awards, now in their 166th year, were presented at Fishmongers’ Hall by Admiral Sir George Zambellas, President of national maritime charity, the Shipwrecked Mariners’ Society.  The Society provides assistance to those suffering financial hardship during or after a life at sea.

The Lady Swaythling Trophy for ‘Outstanding Seamanship’ was presented to Captain Patrik Norrgård of the P&O Ferry, MV Norstream, for coming to the rescue of a sinking ship in the Dover Traffic Separation Scheme earlier this year. He was honoured for his skilled and timely rescue of the seven man crew of MV Fluvius Tamar in January. His Chief Officer, Captain Marek Rowiński, was also rewarded for his crucial role in the rescue.

An Individual Commendation was awarded to Jamie Wilson, Captain of the UK-flagged ROV support vessel, Deep Vision, for conducting nine rescue missions in the space of four days earlier this year north of the coast of Libya and rescuing more than 900 migrants.

An Individual Commendation was also awarded to Freddie Hedger, a senior RNLI lifeguard at Croyde Beach in North Devon, for the courageous rescue of an unconscious body boarder who had found herself in serious trouble after being caught in difficult sea conditions. 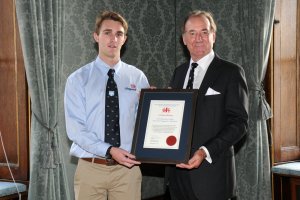 Awards were also presented to charity volunteers for outstanding service and commitment to the Society’s work. Robert Phipps, who runs an ice cream kiosk and is a Teignmouth town councillor was given a Lord Lewin award having taken it upon himself to refurbish and maintain the Society’s collecting mine, positioned next to his kiosk in the town.

Lord Lewin awards were also presented to three other Honorary Agents of the Society: Philip Hili of Malta, Captain Robert Asplet of Jersey and Bruce Coltman of Newcastle and Blyth for their outstanding contribution to the work of Society. 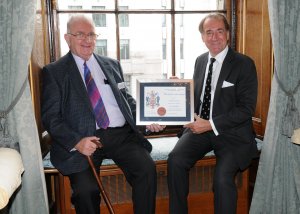 Shipwrecked Mariners’ Society Chief Executive, Commodore Malcolm Williams, commented: “Our awards for skill and gallantry celebrate the endeavours of those helping to save life at sea. It is also the occasion for acknowledging the tremendous work of our volunteers, some of whom have been supporting the charity for over 20 years. The commitment of these individuals allows us to offer support to retired and serving seafarers and their dependants in need. Without their help we simply wouldn’t be able to do this and we are very grateful to them.”

Celebrating its 178th year, the Society has helped hundreds of thousands of mariners and their dependants, including during times of conflict. As we move through the centenary years of WW1 we should remember that over 17,000 fishermen and merchant seafarers lost their lives while ensuring that this Country did not run short of the essential supplies of food, munitions and raw materials without which it could not have survived. The Society assisted over 50,000 survivors and dependants of those lost in the conflict at sea. In the last twelve months, the Society has distributed more than £1.4million in financial support in over 2,000 cases of need.