Three remarkable stories of Skill & Gallantry at sea have been recognised and rewarded at the Society’s annual awards ceremony held in London this week.

The skipper of a fishing vessel, rescue helicopter crews and committed charity volunteers were among those celebrated by national maritime charity, the Shipwrecked Mariners’ Society, for their bravery at sea and dedication to supporting those in need, at its annual Skill & Gallantry Awards ceremony.

The Lady Swaythling Trophy was awarded to Jay Holden, the skipper of the Fishing Vessel Emilia Jayne, for facilitating the rescue of his crewmate who fell overboard in severe gale force 9 winds and 20ft seas off the coast of Salcombe, Devon, in March this year. 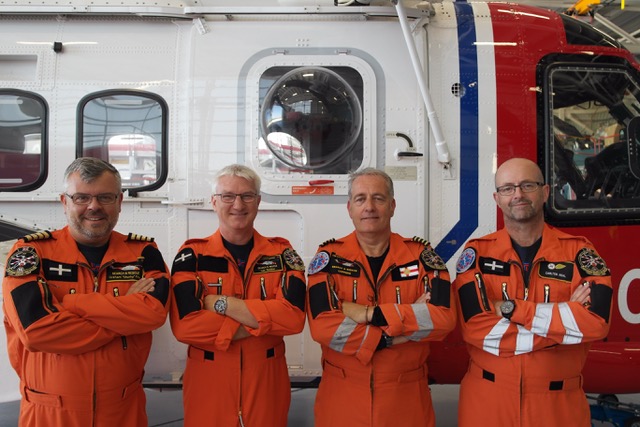 Mr Holden was praised for his calm and professional approach as well as his commitment to safety measures which all but certainly saved the life of his crewman.

The Edward and Maisie Lewis Award, for an ‘outstanding rescue’, was presented to the crew of helicopter Rescue 01 based at Mount Pleasant Airfield in the Falkland Islands. The crew carried out two consecutive, complex and demanding rescues of critically ill patients in demanding and dangerous conditions that pushed their mental and physical endurance, as well as that of their helicopter, to the limit.

As the crew battled with the demanding and treacherous weather conditions, including gale force 9 winds, they showed no sense of giving up and demonstrated exceptional professionalism, skill and bravery to bring the patients to safety.

A Crew Commendation was awarded to the crew of Rescue 924 helicopter, who were tasked with evacuating the crew of the French fishing vessel La Fanette which was drifting, having lost power and at risk of running aground close to Land’s End. Arriving on scene just 40 minutes later, they encountered gale force 9 winds, with gusts up to 60 knots, and 20ft waves. The vessel was pitching and rolling unpredictably making a suitable transfer point difficult to identify.

The majority of the operation had to be flown manually and at night, requiring exceptional airmanship, with the added pressure that the vessel was slowly drifting towards rocks. Despite this, all crew members were winched to safety before receiving medical treatment.

Lord Lewin Awards for outstanding service to the charity were also presented to two Honorary Agents for their remarkable commitment and long-term service. Superintendent ‘Sal’ Van Beem was honoured for her dedicated casework and exceptional commitment to the maritime community in Hull.

A Lord Lewin award was also presented to Caroline Spencer, who has been an honorary agent – one of the charity’s volunteers operating around the UK – for the Society for the last 16 years. Caroline was credited with being an effective and dedicated fundraiser for the Society, diligently managing one of its large mines, including overseeing the delivery and installation of a brand new mine in 2007.

The honours were presented at the Society’s 168th annual Skill & Gallantry Awards by President, Sir George Zambellas GCB, DSC, DL, FRAeS, at the charity’s AGM at Fishmongers’ Hall in London.

Chief Executive of the Shipwrecked Mariners’ Society, Captain Justin Osmond RN, commented: “The Skill and Gallantry Awards is a fantastic opportunity for the maritime community to celebrate the brave, unsung heroes of the industry. This not only includes individuals who have displayed bravery and skill by helping those out at sea but is also an important opportunity to recognise the remarkable work of the charity’s Honorary Agents, who are vital to the success of the Society.

“We are honoured to celebrate these individuals that give so much of their time to supporting the maritime community, as without their dedication we would not be able to help as many people as we do. The awards are our way of saying thank you to everyone and to show our appreciation for everything they do.”