SS Diana was a British cargo vessel of 1,126 tonnes that was built in 1899 by Bergens Mekaniske Verksteder A/S, Bergen. At the time of her loss a century ago, she was owned by The Shipping Controller, managed by Pelton S.S. Co, Newcastle. 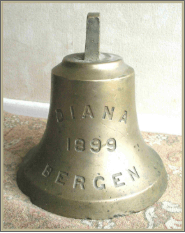 On 7 June 1918, the Diana was on passage from the Tyne to Rouen with a cargo of coal when she was torpedoed without warning at 4.00 a.m. by a German U-boat. The torpedo struck the starboard side with all the crew taking to their own boats. Five minutes later the vessel sank. The passengers were later picked up by a patrol vessel and landed at Immingham.

Thankfully, there were no casualties.

The Shipwrecked Mariners’ Society has offered assistance for fishermen and mariners in need since 1839. The maritime charity provides help for mariners, retired seafarers and their dependants, through financial help including welfare grants, as well as assistance and support.