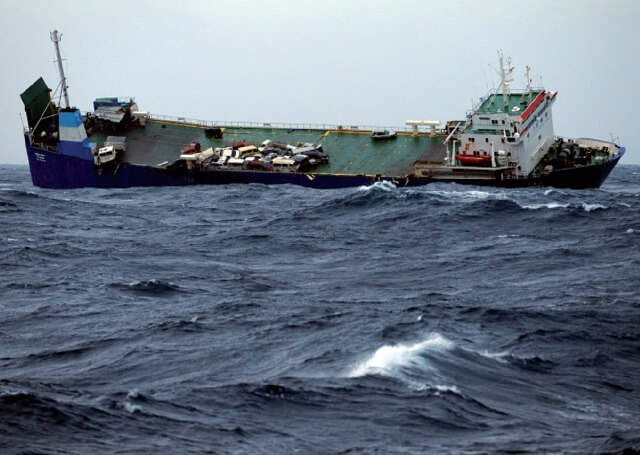 The crew of HMS CHATHAM’s Lynx helicopter from 815 Squadron based at Yeovilton have been honoured for their skill and gallantry after undertaking a dangerous sea rescue in the wake of a tropical cyclone.

On 21st May 2010, the crew of HMS CHATHAM’s Lynx helicopter responded to a distress call from the merchant ship MV Dubai Moon whose cargo of cars and trucks had broken free when she was caught in the centre of a tropical storm in the Indian Ocean. Rolling heavily, the ship was unable to manoeuvre and at risk of sinking along with her 23 crew members.

While Flight Commander Lieutenant Commander Peter Higgins AFC fought to maintain a steady hover with the expert assistance of Lieutenant Craig Castle of the Royal Australian Navy, Air Engineering Technician Richard Wilmot, a newly qualified winchman, was lowered onto the vessel where he successfully recovered the first crew man from the oily rolling deck. 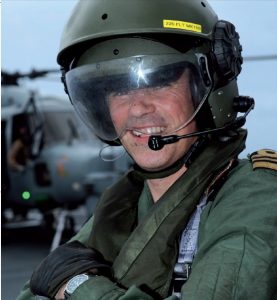 Richard Wilmot became violently ill on his return to the aircraft following his extreme physical exertion and the recurrence of previous sickness. Lieutenant Commander Graham Chesterman, who was visiting HMS CHATHAM and conducting an aviation audit and who had not flown for 15 years, was asked to take over.

Lieutenant Chesterman went on to conduct a total of 22 difficult and physically exhausting transfers over three hours displaying skill and courage in dangerous conditions. The crew of the HMS CHATHAM’s Lynx helicopter were awarded The Edward and Maisie Lewis Award at the Society’s ceremony for their outstanding teamwork and courage and Lieutenant Chesterman was also awarded an individual commendation for his bravery.

Chief Executive of the Shipwrecked Mariners, Commodore Malcolm Williams CBE RN said: “Lieutenant Commander Graham Chesterman and the crew of HMS CHATTAM’s Lynx helicopter showed outstanding professionalism, superb teamwork and courage in rescuing the crew of the MV Dubai Moon. The rescue demonstrated all that is best in the seafaring tradition.

“The Society’s annual October Skill and Gallantry Awards are an important event in the maritime calendar and a chance to honour all those unsung heroes who risk their lives to keep seafarers and members of the public safe. Every year I am struck by the qualities of the men and women who are nominated and the courage they display in helping those in distress at sea. We have received some worthy nominations this year and found it hard to choose the recipients of each award but the winners do our seafaring community proud.”

The Lady Swaythling Trophy 2011 – for an outstanding feat of seamanship

passengers and crew on a dismasted sailing ship drifting 100 miles south west of the Isles of Scilly has been presented with The Lady Swaythling Award for his skill and gallantry by HRH The Princess Royal.

Shaun Edwards, Skipper of fishing vessel NOVA SPERO and his crew had stopped fishing on the evening of 28th October 2010 due to deteriorating sea conditions when they heard a distress call from the Polish Tall ship Fryderyk Chopin. The ship had suffered the dismasting of its fore and main masts in heavy seas 100 miles south west of the Isles of Scilly.

Making the decision to attempt the rescue of the ship and her 11 crew and 36 fourteen-year- old Polish cadets, the crew of the Nova Spero – a vessel three times smaller than the Fryderyk Chopin – undertook the seven-hour passage to her aid in gale-force winds.

After arriving on the scene, it became clear that no other vessel had been able to establish a tow line. 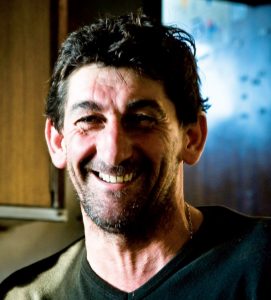 Despite the rough sea conditions and vanishing daylight the crew of the NOVA SPERO succeeded in setting up the tow, Then, for over 60 hours Shaun Edwards and his crew, Richard Nudd, David Fyfee and Lewis Diamond, towed the Tall ship 150 miles to Falmouth in heavy seas and strong winds, finally arriving safely in Carrick Roads on the 1st November.

“The Society’s annual October Skill and Gallantry Awards are an important event in the maritime calendar and a chance to honour all those unsung heroes who risk their lives everyday to keep seafarers and members of the public safe. Every year I am struck by the qualities of the men and women who are nominated and the courage they display in helping those in distress at sea.” 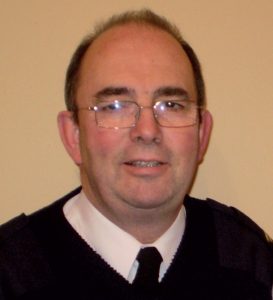 An Aberdeen man, who has spent 25 years supporting seafarers in need, has been honoured at the Shipwrecked Mariners’ Society’s annual Skill and Gallantry Awards ceremony with the presentation of their Lord Lewin Award.

Superintendent Mike Sandison, who worked at sea as a steward for several years before joining the Fishermen’s Mission in 1986, supports over 100 regular beneficiaries of the Society as well as ministering to a wider group of both working and retired fishermen and their dependants.

During the last three years alone, Mike has dealt with over 70 new applications for assistance, reviewed 85 cases and has conducted twice-yearly grant payments.

Mike is described by those that he works with as quietly-spoken, self-effacing and diligent – with a famous sense of humour – and always builds a good rapport with the Society’s beneficiaries.

On receiving his award, Mike said: “I’m thrilled to receive this honour from the Shipwrecked Mariners’ Society. I’m quite taken aback! It’s amazing to receive recognition for what I see as just doing my job – I began working with the Society through the Fishermen’s Mission 25 years ago and I enjoy my role very much. I love working with people and it’s lovely to help those in need receive grants to make their lives just that little bit easier.”

The Lord Lewin Award is presented to the Honorary Agent who has made a significant contribution to the work of the Society.