More than 60 people attended the event despite appalling weather conditions forcing the usual boating, fishing and swimming to be cancelled, with the day instead filled with food, drink, games and enjoyable conversation.

The annual charity auction was held in the evening – in aid of the Shipwrecked Mariners’ Society – where generous donations of prizes and bids saw the total funds raised surpass £1,500 for the Chichester-based charity. 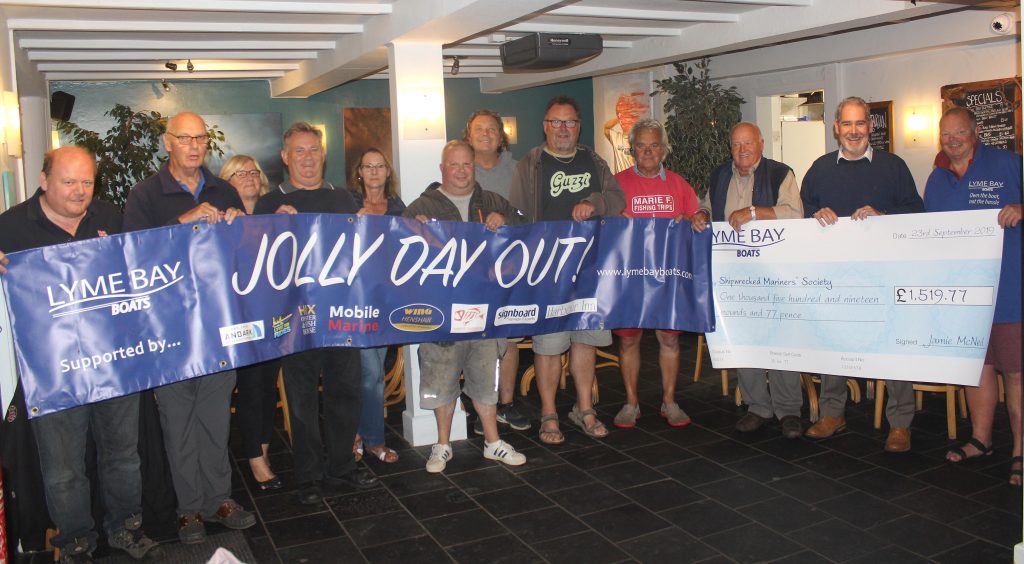 On Tuesday 23 September at a reception held at The Harbour Inn, Lyme Regis, Jamie McNeil, Director of Lyme Bay Boats, presented a cheque for £1,519.77 to Chief Executive of the Shipwrecked Mariners’ Society, Captain Justin Osmond RN, for the charity to continue its work supporting fishermen, merchant mariners and their dependants who are suffering financial hardship.

Also attending was the Society’s volunteer Honorary Agent, John Wason and his wife Claire.  For 28 years John has done a terrific job looking after the Society’s large WWII collecting mine at Lyme Regis harbour.

Discussing the ‘Jolly Day Out’, Jamie said: “Firstly I’d like to thank everyone who helped in making the day a true success despite the challenging conditions!

“The rain thankfully didn’t dampen our spirits and I think I speak on behalf of all of those in attendance when I say what an enjoyable – and indeed jolly – day it was!

“I’m extremely proud to be able to present a cheque for such a significant amount of money to a very worthwhile cause, knowing it will benefit the lives of those we share a maritime community with.”

Captain Justin Osmond added: “We are extremely grateful for the support we receive from all of those who provide us with vital funds to support our beneficiaries.

“The Society appreciates the generosity of everyone at Lyme Bay Boats and those who took part in what sounds like an extremely fun day – despite one of the wettest August days on record – and hope we can work together on further projects in the future.”

To find out more about Lyme Bay Boats, go to http://www.lymebayboats.com/.