FULL CITATION: The Lord Lewin Award is for outstanding service to the Society 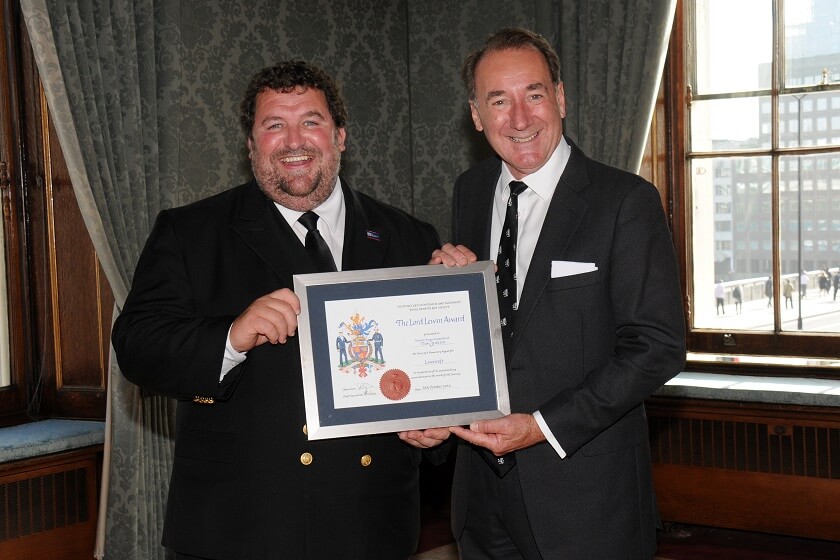 A larger than life Welshman, Senior Superintendant Tim Jenkins joined the Fishermen’s Mission in 2007 and concurrently became one of our Honorary Agents. Since then has worked tirelessly on behalf of both our organisations supporting local Fishermen and their dependants. This reflects his deep Christian calling.  Over the past three years Tim has sent us 131 new applications and has completed 58 reviews on our behalf.

Tim covers five separate areas for SMS completing applications, reviews and delivering cheques. There are 65 Shipwrecked Mariner regular beneficiaries supported by him along with many individuals who receive one-off grants of white goods, household items and other forms of financial support. He always seeks to go beyond the symptoms of an apparent problem to the causes of distress or hardship and leaves no stone unturned in providing what he sees as the right level of support required, including health checks.  It’s Tim’s efficiency that really makes him stand out. We often get a phone call from him from a beneficiary’s house and in the next post a completed application will arrive with all the additional information we have requested so that we can act quickly.

As well as all the hard work Tim does for the charity and the Fishermen’s Mission he has also on several occasions taken the time to support new Fishermen’s Mission staff with the Shipwrecked Mariners’ Society application process. Tim is well respected by charity staff, his Mission colleagues and the fishermen he serves.

He gives pastoral support to the bereaved and conducts many funerals with great sensitivity. On behalf of the Mission he also pioneered the distribution of Personal Flotation Devices to fishermen.  His work on behalf of fishermen, mariners and their dependants is deserving of our special recognition.