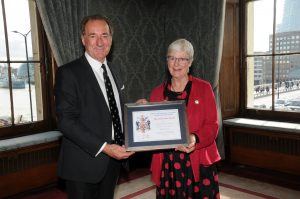 Caroline Spencer has been an Honorary Agent for the charity in Brightlingsea since 2003, having taken over the role from her late husband Jim who had himself volunteered in the position from 1991.

Caroline has been an effective and dedicated fundraiser for the Society, not only in managing one of its large collecting mines, including overseeing the delivery and installation of a brand new mine in 2007, but also in undertaking a wide range of additional activities, including delivering fundraising talks on behalf of the Society, helping to promote its Christmas cards and in administering several model collection mines in the local area.

This year marks the 168th awards ceremony, which acts as an opportunity to show appreciation to individuals who have displayed outstanding service and commitment to the charity over several years.

Chief Executive of the Shipwrecked Mariners’ Society, Captain Justin Osmond RN, commended the work of Mrs Spencer, saying: “As an exceptionally committed and long-term supporter of the Society, Caroline is thoroughly deserving of special recognition for her outstanding efforts.

“We are tremendously grateful for all of those who advance the causes of the Society – whether it be through case work, fundraising or simply those spreading the word about what we do. Caroline, along with her late husband Jim, has been a face of the charity for many years and it is an honour to present her with this award.”