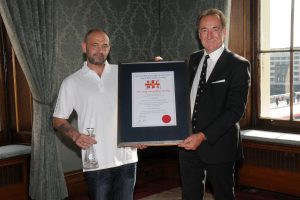 In the early hours of Sunday 10 March 2019, a fisherman from the Emelia Jayne was swept overboard having been struck by a large wave which lifted him off his feet and over the side of the vessel.

Mr Holden displayed notable calm and professionalism in contacting the coastguard, turning the vessel around and heading back towards the last known position of his crewman in high seas and darkness.

The treacherous conditions, with severe gale force 9 winds and 20ft seas, made it a significant challenge to maintain a steady course but the crew were eventually able to identify a casualty in the water. Despite being unable to recover him on board immediately, the crew liaised further with the Coastguard and the Newquay Coastguard helicopter and deployed an orange smoke flare to help the winchman identify the casualty and perform a swift recovery.

Whilst the rescue of his crewmember involved multiple parties, Mr Holden’s quick thinking, cool professionalism and excellent seamanship, including a long-term focus on maintaining a robust safety regime, underpinned the amazing rescue.

Without his commitment to the safety of his crew and his calm, professional response to the emergency, Mr Holden may not have saved his crewmember that day, proving is a most worthy recipient of the Lady Swaythling Trophy for 2019.