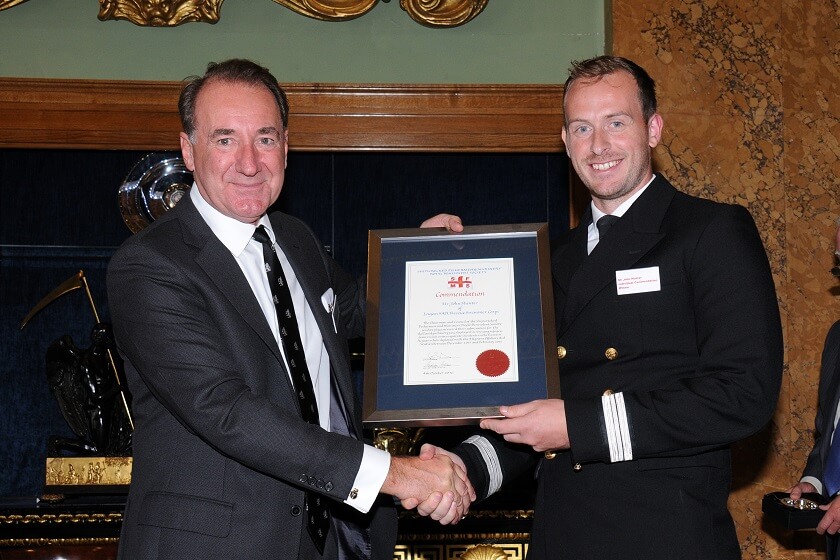 John Hunter is a leading member of the Lagan SAR Rescue Swimmer Corps and has been a search & rescue volunteer for six years.

Between December 2015 and February this year, volunteer Rescue Swimmers from LSAR were deployed aboard Fast Rescue Craft operating as part of the Migrant Offshore Aid Station in the Eastern Aegean. John Hunter was part of this ongoing search & rescue mission that has seen LSAR volunteers actively involved in the rescue of 246 refugees who were in peril at sea or who were shipwrecked on the jagged shores of the Greek Islands.

John embarked on his 2-week deployment, fulfilling the role with courage, compassion and determination. Over the period of his deployment, he was tasked to recover refugees from stricken vessels that were taking in water and at risk of capsize; to recover those in peril in the water and to swim through dangerous seas to the rocky coastline to conduct searches for those shipwrecked and injured along normally inaccessible parts of the Greek shoreline.

John was involved in two specific incidents of note. The first involved the rescue of a number of refugees from a stricken boat to the safety of the Fast Rescue Craft, Topaz Responder. This rescue unfolded during the night and was undertaken in darkness with only the spotlight from the rescue craft providing illumination. The sea was choppy with prevailing Force 5 winds and a moderate swell. As the only Rescue Swimmer on board, John had to manually transfer a significant number of casualties from their vessel, which was without power and taking in water, to the safety of the Fast Rescue Craft.

During this rescue, John was forced to reach out to a mother who was attempting to transfer her baby to the Fast Rescue Craft. Due to the difference in freeboard between the vessels, both rescuer and the baby’s mother were at full stretch. This transfer was compounded by the language barrier and the movement of both vessels in the swell. At the moment of transfer, another wave hit the casualty vessel, just as the mother had released the infant. John lunged forward over the guard rail and grasped the infant before it fell into the sea between the two boats. Once the baby was safe, John immediately returned to facilitate the rescue of the remaining migrants. A number of these casualties needed immediate medical care. Once all were safely onboard the Fast Rescue Craft, John reverted to his role of Medic.

The second incident involved a transfer of a number of casualties, including several children, older people, a woman with an unstable fracture to the leg and a heavily pregnant woman. This rescue involved the mothership Topaz Responder. Again, due to the difficulties in language and the fact that the stricken craft was without power, it proved difficult to safely secure it alongside for the transfer. The situation was exacerbated and became life threatening when the casualties surged to one side of the vessel in anticipation of rescue. At this point, the craft was at significant risk of capsizing. Without thought to his own safety, John immediately jumped nearly 3 metres, onto the stricken craft. He immediately took control, reassuring those on board and urging them all to remain seated. This action safeguarded the migrants and enabled John to get lines to the rescue vessel. He then assessed the casualties and assisted in their transfer. He remained calm and collected throughout the incident, despite the obvious risks and the clear distress of the casualties who were screaming and crying out for the duration of the rescue. 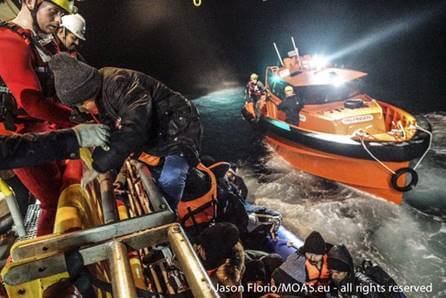 Over the duration of the tour, John was directly involved in the rescue of 142 refugees 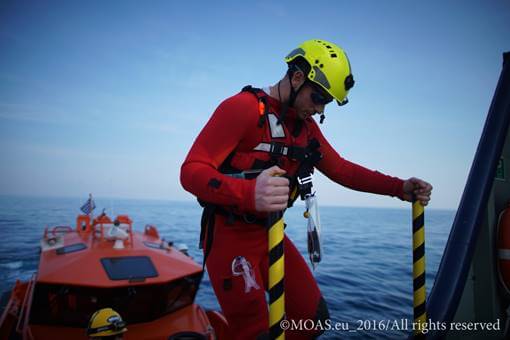