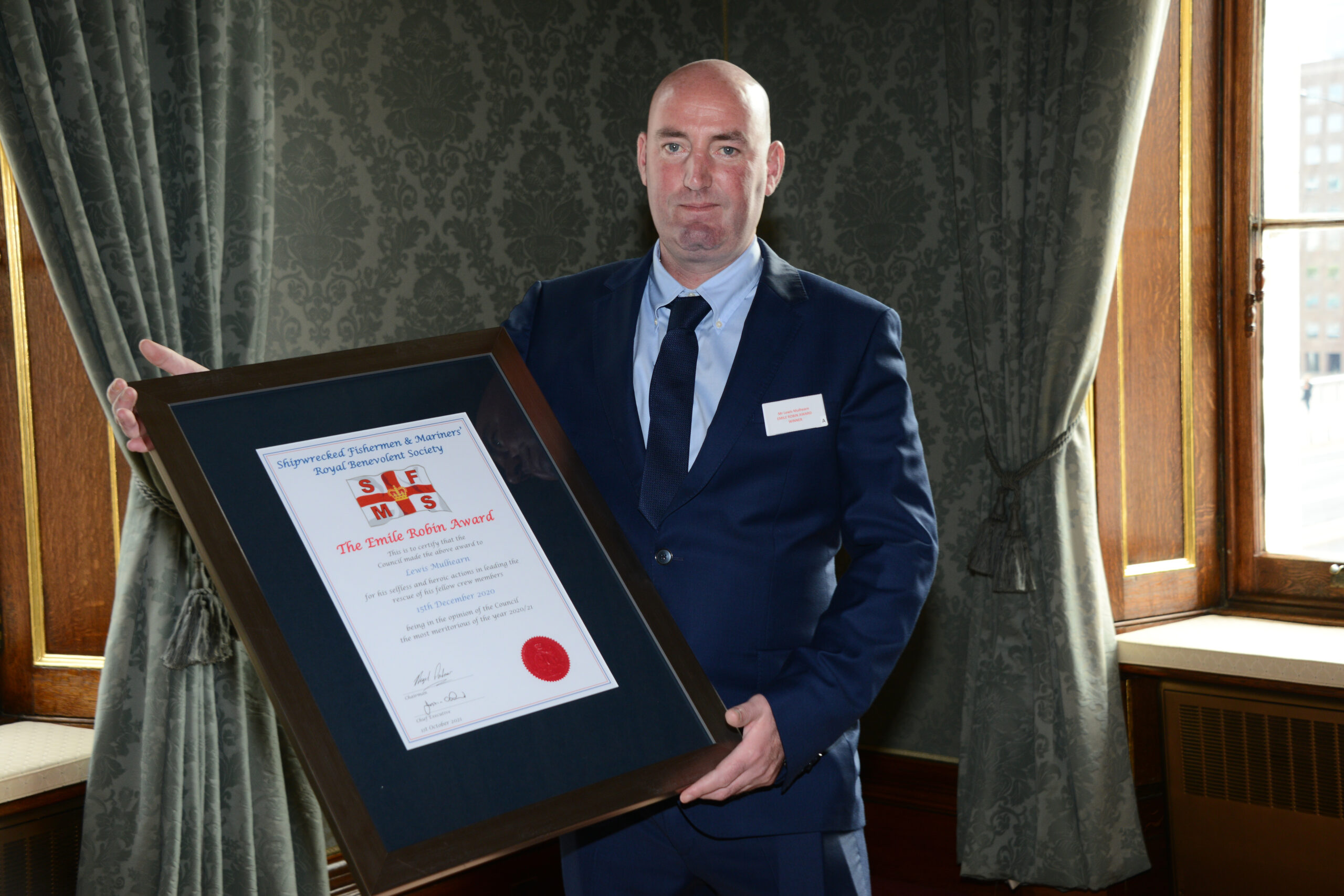 For the rescue of survivors in perilous conditions

Following catastrophic damage to his vessel, caused by the detonation of unexploded ordnance on the seabed, the selfless and heroic actions of Galwad y Mor’s skipper ensured the safe evacuation and rescue of 6 crew members.

On the morning of Tuesday 15th December 2020, the potting fishing vessel Galwad Y Mor was operating in crabbing grounds east of the Wash when an underwater explosion raised the vessel up from the sea surface before depositing it back, very heavily, on the water. The 5 crew who were working on deck were thrown off their feet and deluged with sea water. Galwad y Mor’s skipper, Lewis Mulhearn, who was in the wheelhouse at the time of the explosion, was severely injured. Despite having received a significant blow to his head, which left him dazed, the skipper swiftly took stock of the situation, with it rapidly becoming apparent that four of his crew were also severely injured. The wheelhouse had been decimated by the explosion, as had the vessel’s hull and internal machinery. Power had failed completely and water was pouring into the engine room. Having located the emergency handheld VHF radio in the debris of the wheelhouse, the skipper sent a distress message on channel 16 whilst also contacting sister vessel, Ingenuity, to request that a distress message be relayed to the coast guard.

Noting the significant ongoing risk to his crew, and despite his severe injuries (which included three broken vertebrae, a broken sternum, knee damage, a broken orbital bone and multiple face lacerations) the skipper, with the help of a crew member, launched the vessels life raft, before ordering the crew to change from their personal floatation device into foam lifejackets and prepare to abandon ship. All the crew were eventually picked up by 2 boats operating from an offshore support vessel, with the skipper ensuring he was the last to evacuate the vessel.

It is clear from this report that Lewis Mulhearn remained calm and professional throughout this extraordinary and extreme event, which was later shown to have been caused by the detonation of unexploded ordnance on the seabed. Despite great uncertainty over the condition of his vessel, and the extent of injuries to his crew, he rapidly assessed the risks and made timely and well-balanced decisions to ensure the safe evacuation of all personnel. All of his actions, including carrying crew members into the attending rescue boats, were conducted despite being in very considerable pain, not least of which came from a broken back. Of particular note the effectiveness of his actions was enhanced by a strong safety culture onboard the vessel, which via regular safety drills ensured that the whole crew was well prepared for emergencies.

As such Mr Lewis Mulhearn has been selected as the 2021 recipient of the Emile Robin Award to recognise his heroic and selfless actions in rescuing fellow survivors during this extremely perilous incident.