For an Outstanding Air/Sea Rescue

Two rescues in one sortie in extreme conditions were accomplished through the highest standards of crew co-operation, professional skill, flexibility and determination. 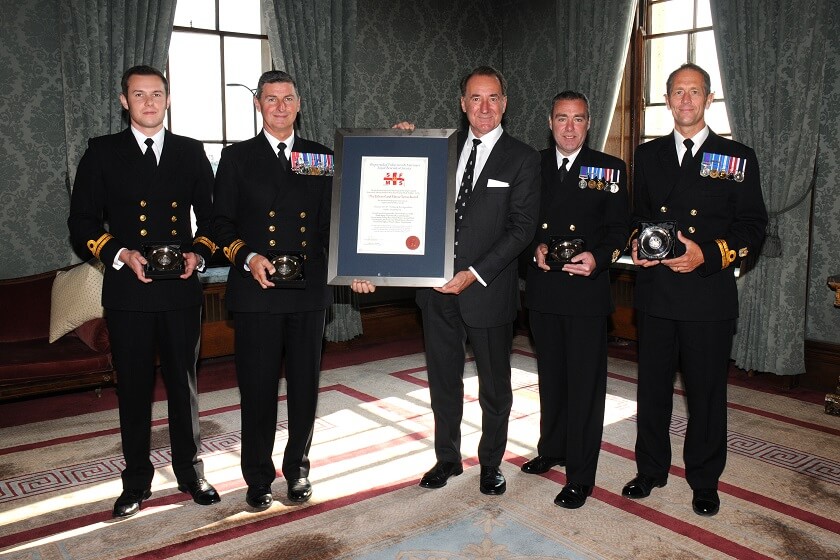 At 0625 on the morning of 16 November 2015 the crew of ‘Rescue 193’  were tasked to go to the assistance of the Irish Fishing Vessel Patrick after she reported an injured crewman requiring urgent evacuation. He had a severely damaged arm which had been crushed in the vessel’s hydraulic winch. The crew: Lt Cdr Steven Hopkins (pilot and aircraft commander), Lt Philip Ross, (second pilot), Lt Jason Sawyer (observer) and CPO Aircrewman Mark Shaw (winchman), launched some 25 minutes later. FV Patrick was reported to be 140 nm west of Culdrose. The aircraft departed in darkness with broken cloud at 400 feet and visibility appearing to be good out at sea. Initially sea conditions seemed relatively calm but once beyond 50 nm it quickly became apparent that conditions were deteriorating rapidly.  With the approach of ‘Storm Barney’ a heavy westerly swell was building and the sea state increasing, which would make this no simple task.

A radar target, suspected to be the FV Patrick was identified close to the reported position. The vessel, a 23 metre stern trawler, was pitching and rolling heavily in the increasing swell and the sea state was 7/8.  Her stern was inaccessible due to machinery and netting gear making the only viable option a fo’c’sle transfer. This was going to be difficult due to the proximity of a forward mast and stays.  Communications with the vessel were eventually established and the skipper indicated that they were familiar with Hi-Line techniques. As she manoeuvred on to the desired transfer heading the vessel rolled heavily and now heading down sea began surfing the swell, pitching and rolling unpredictably with each wave.

A Hi-Line was successfully passed to the vessel and tended by the deck crew but initial attempts to land Mark Shaw on board were aborted as the trawler lurched violently in the swell, pitching sharply, and rolling rapidly out of the pilot’s view. The helicopter stood off; still with the Hi-line attached, to await a period of relative calm before attempting a further transfer: this time the winchman was successfully transferred to the deck. The Hi-Line was recovered and the aircraft climbed to allow Mark to work with the casualty and communicate with the skipper. Having assessed the crewman’s injuries and re-dressed his wounds Mark  indicated that he was ready for recovery but given the sea conditions and restricted transfer area it would have to be via a double lift harness rather than the preferred stretcher recovery.  The aircraft returned to the transfer area to initially drop the Hi-Line prior to the recovery of both the aircrewman and the casualty from the fo’c’sle.

As this was going on further potential tasking was being received from the ARCC in Kinloss, the details of which were being plotted by Phil Ross.  With the Hi-Line being tended once more by the trawler’s crew, several attempts to position for a safe pick up had to be aborted as the vessel was continually being tossed around in the heavy sea.  However, the calm, effective and professional con maintained by Jason Sawyer eventually enabled the pilot to position safely to complete the extraction of Mark Shaw, the casualty and associated equipment to the aircraft.

Having secured the first casualty the crew switched their focus to a second injured fisherman onboard the French FV Le Nautile approximately 45-50nm south of ‘Rescue 193’s’ current position. It was assessed that there was sufficient fuel and that the first casualty was stable and comfortable enough to cope with the additional transit time required for a second evacuation.

‘Rescue 193’ proceeded to the Le Nautile’s reported position and eventually established communications with the skipper.  A further Hi-Line fo’c’sle transfer was agreed and the vessel directed to an appropriate course to try and minimise the surfing effect of the heavy swell.  The available deck area of the FV Le Nautile was a little larger than the Patrick and  the crew were able to quickly effect a Hi-Line and winch transfer.  With Mark Shaw now aboard Le Nautile assessing the second casualty, Jason Sawyer continuing to administer care to the first casualty and Phil Ross responsible for communications, fuel calculations and ‘go time’, crew teamwork was paramount. The second casualty had a hand injury and given the worsening sea conditions the decision was made to carry out a double lift recovery.  Once again with calm, precise instructions Jason Sawyer guided the pilot into position for a safe pick up.

The aircraft departed the scene and delivered both casualties to the Royal Cornwall Hospital Truro.

The crew of ‘Rescue 193’ acted commendably as a team throughout both of these testing rescues. Relatively inexperienced in poor weather maritime rescues, Phil Ross coped extremely well in the left hand seat; able to use his initiative and skill to develop a plan for the aircraft commander, particularly whilst the initial rescue from FV Patrick was underway.  Steven Hopkins showed considerable skill and daring in handling the aircraft in very challenging conditions, often with minimal visual references, over a pitching vessel in high winds with a difficult and unpredictable swell.  Jason Sawyer was able to calmly con the aircraft and transfer the winchman to the deck on two occasions.  Mark Shaw was cool headed, displaying extreme determination and bravery in heavy seas in order to rescue the two injured fishermen.