The back-to-back rescues of critically ill patients onboard two different vessels in the Atlantic Ocean was recognised for an outstanding air/sea rescue. 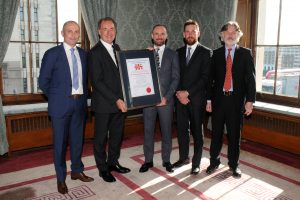 The crew of helicopter Rescue 01, based at Mount Pleasant Airfield in the Falkland Islands, were presented with the charity’s Edward & Maisie Lewis Award for an outstanding air/sea rescue.

On the afternoon of Thursday 17 January 2019, the crew of Rescue 01 were given advanced notice of the need to conduct two consecutive, complex and demanding rescues that would in turn put themselves at risk, with no secondary search and rescue helicopter following behind in case of emergency.

An hour before sunrise on Friday 18 January, Rescue 01 was launched into severe weather conditions to rendezvous with the MV JAMES CLARK ROSS, in order to recover a critically ill patient with life-threatening injuries 200 nautical miles away. Having arrived at the scene and assessed the severe conditions, with strong gale force winds in excess of 45 knots and a high swell, the crew had minimal time to conduct a stretcher transfer of the casualty, requiring an innovative approach to the recovery and exceptional skill from the whole crew but particularly the pilot, Capt. Johnny Green.

Having successfully recovered the casualty, Rescue 01 returned to Mount Pleasant Airfield, with the patient immediately then onward transferred by plane due to the critical nature of his condition.

Just over two hours later, Rescue 01 with the same crew, was once again airborne, this time heading towards another critically ill patient aboard MV PLANCIUS. In the intermediate hours, the weather had significantly deteriorated, particularly in terms of the sea state and swell, making the transfer of the patient extremely difficult. Despite these very demanding conditions the whole crew demonstrated exceptional professionalism, skill and bravery to recover the patient, before arriving at Port Stanley airfield four hours and 44 minutes after take-off.

The crew selflessly operated at ranges well beyond those which would normally be expected, in two exceptionally demanding back to back missions; they did so despite significant risk to themselves but based on a clear imperative to save lives.

Under pressure to conduct their life saving task in very limited time, or risk having insufficient fuel to return to base, the skill and professionalism of the entire crew never waned, and they are extremely worthy recipients of the charity’s prestigious Edward & Maisie Lewis Award.