The crew were honoured for outstanding airmanship, teamwork, skill and determination following the dramatic rescue of six crew members from a stricken vessel. 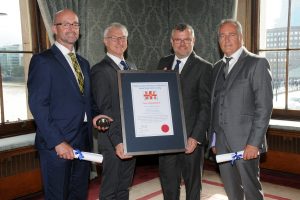 On 12 March 2019, the FV LA FANETTE lost power and was in danger of running aground off the coast of Land’s End, when Rescue helicopter 924 was tasked to evacuate the crew.

Having investigated various positions on the vessel from which to evacuate the crew, it became evident that the safest winching location was the bow. This required exceptional airmanship, with the aircraft effectively flying sideways to maintain formation with the vessel.

With the vessel pitching and rolling violently in severe winds, the rescue was not without difficulties; during the first transfer the vessel lurched and pitched up causing two survivors to impact the bow, with one sustaining a shoulder injury. On the last lift, the hi-line parted due to the conditions and a second hi-line had to be used to recover the winchman. However, the skill of the rescue team enabled all of the crew to be winched to safety before returning to Newquay, where the injured fisherman received medical attention.

The rescue was conducted at night, in atrocious weather and sea conditions, with the added pressure that the vessel was slowly drifting towards rocks. Although the fishing crew were wearing immersion suits and life jackets, if they had entered the water, their chances of survival in the raging sea would have been very slim. The rescue was dynamic and in appalling conditions, but from commencement of the winching it took less than 20 minutes to recover all six crew and winchman to the aircraft.

The crew of Rescue 924 displayed incredible calm, skill, quick-thinking and professionalism in conducting a night-time rescue in extreme conditions and under significant time pressure.